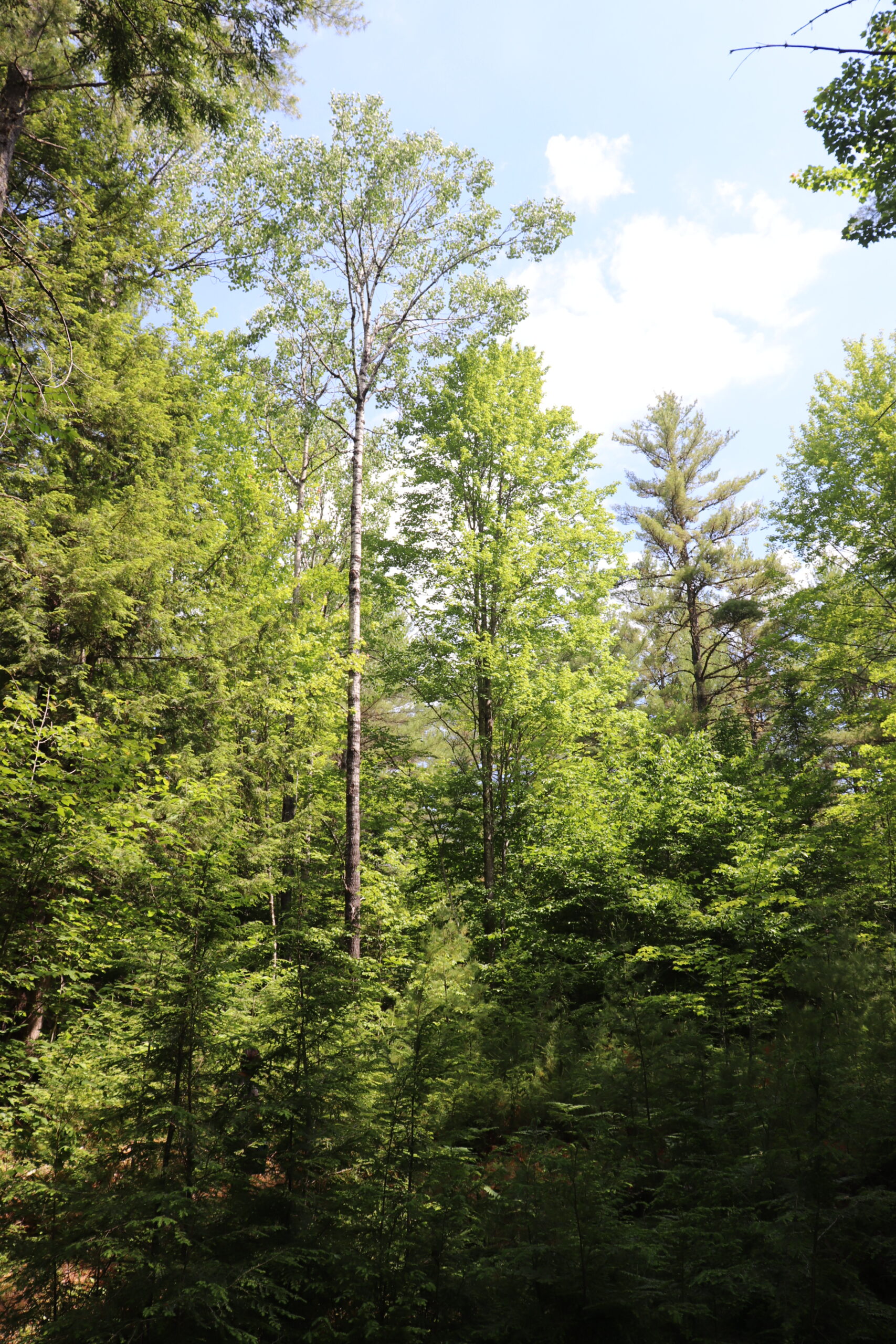 The forest — any forest, really — doesn’t just stretch out across the land like a blanket (or a washcloth if it’s a small patch of woodland). It goes up and down as well. But this vertical dimension is something we overlook, even those of us who find forests endlessly fascinating.

For instance, we often talk about the tropical rainforest ecosystem, or the spruce-fir ecosystem, or the oak-pine ecosystem. But by characterizing it that way, we’re missing the fact that every forest type has myriad ecosystems, depending on what level of the forest you’re looking at.

You might compare a forest to a skyscraper, where the building goes down far below ground level, anchored to bedrock just as it soars to the sky above. The lowest levels might be devoted to parking, the next up to operating systems like electricity or heating-ventilating and air conditioning. Shops might colonize the ground floor, offices farther up, apartments take over the mid-levels. Then there are the penthouse apartments, the apex of the skyscraper’s canopy. Unless, of course, it’s a modern skyscraper with a rooftop garden.

Each level is used by a particular group of people for a particular purpose, an ecosystem of individuals. But some people move up and down through the building using multiple niches. It’s complex. A forest is complex too. Of course, the analogy isn’t perfect, but it can give you an idea of how to think about the forest in all its vertical glory.

In the forest, the mineral soil layer, or even the layer below that, might be thought of as the basement. Tree roots, and their partners, mycorrhizal fungi and bacteria, access these layers for water and nutrients.

Next up is the organic layer. It’s sometimes divided into two — underneath the rich soil where you can’t distinguish individual rotting leaves and the upper layer, commonly called the duff or leaf litter, where you can. It is a veritable megacity of life forms — bacteria, insects, spiders, mites, and other invertebrates; amphibians and some mammals too. It is densely woven with plant roots and laced with the whitish strands of fungal mycelium, the vegetative part of fungi that help turn dead wood and leaves into humus and that partner with trees and shrubs to share nutrients.

The next layer is at ground level: herbaceous plants — ferns, mosses, and woodland wildflowers like lady slippers, Canada mayflower, and bunchberry. The next level is that of shrubs — hobblebush, beaked hazelnut, huckleberries, and blueberries. Then comes the lower canopy of small shade-tolerant trees like striped maple and eastern hophornbeam as well as saplings of canopy trees struggling to ascend like a young lawyer striving to make partner. Then the canopy of big trees like birches, maples, oaks, beeches, and hemlocks.

But the canopy doesn’t stop there. Beyond it are the “super-canopy” trees. Those that punch through the green layer at the top of the forest. “We have a tree that does that here in Maine, the white pine,” said Andrew Barton, a professor of biology at the University of Maine at Farmington and the author of The Changing Nature of the Maine Woods. “It’s a super canopy tree, an emergent tree. In the southern Appalachians the tulip poplar can play that role. In the Pacific Northwest Douglas fir can do that.”

The canopy and “super canopy” trees are themselves home to plants that never touch the ground. They are called epiphytes — lichens and mosses — and get their nutrients from the air, the rain and debris caught in the bark or limb junctions.

While scientists use the idea of “layers” to teach people about how a forest works, many downplay the idea of distinctly separate layers of the canopy, generally dissected as the ground level layer, the mid-canopy and the upper canopy.

“All forests have layers, but those categories are a little bit artificial. “If you truly look at any forest, tropical or temperate, it’s pretty continuous,” said Barton. “But even though it’s arbitrary it’s incredibly helpful to understand that the forest has this vertical dimension.”

Shawn Fraver, a forest ecologist and professor in the School of Forest Resources at the University of Maine, says the same thing. A lot of early research on canopy communities was done on tropical forests, said Fraver, who has done his share of scientific research in the tropics. “But in Maine, the layers are much less distinct. It’s hard to pick them out. Aside from the forest floor I generally don’t recognize distinct layers.”

Forty years ago scientists had little understanding of what tropical rainforest canopies and their communities were like. Intrepid ecologists like Nadini Nadkarni pioneered the art of using mountain climbing equipment and techniques to go high in the forest giants. Nadkarni did censuses of rainforest communities in Costa Rica. Others did similar work in the Pacific Northwest’s coastal rainforests.

Fraver said there hasn’t been nearly as much research on canopy communities in the eastern temperate forests, the plant-insect-animal communities of which are admittedly nowhere near as diverse, partly because winter casts a chill over that upper level biodiversity and partly because those canopies aren’t evenly moist and warm.

Maybe that lack of research into canopy communities in the north stems from the fact that they’re harder to work in than a forest in Amazonia or a redwood/Douglas fir forest.

Fraver thinks it might just be a “lack of interest. There’s no scientific basis for the lack of research. It’s just not on anyone’s radar,” he said. There is life up there, he said, and it’s worth getting to know better. Fraver said a friend and fellow researcher, Gregory McGee of the State University of New York at Syracuse has looked at how epiphyte communities differ among Adirondack forests that are managed differently. Epiphytes are plants like lichens and mosses that grow on other plants.

In one project McGee and two colleagues looked at mites that lived in the canopy of an old sugar maple forest in New York State and found 25 species, including three new to science, Fraver said. The researchers found that there were seven times as many mites on a particular species of lichen as on bare bark, and that trees in old growth and managed stands supported entirely different mite communities.

Most birders would not be surprised by the fact that different species of birds use different levels of trees in the forest. The famous ecologist Robert MacArthur looked at how different types of warblers used the woods and found that they divided it up vertically, said Barton.

Cape May and Blackburnian warblers were in the topmost branches, black-throated green warblers in the mid-levels and the ovenbird, a type of warbler, scratches around on the forest floor, notes Barton.

It’s not only lichens and birds that use the canopy of a temperate forest. Mammals do too. Bats, for instance. Flying squirrels. Some animals move up and down through the canopy and spend part of their time on the ground:  fishers, raccoons, porcupines, even bears.

“We don’t have forests as complex as tropical forests, but there are species that live up there. We clearly don’t quite have an appreciation for what is going on up there,” said Barton. “Part of the reason tropical rainforests have so much going on in the canopy is that it’s warm and wet and consistently so most of the year. That allows a canopy ecosystem to develop. In temperate forests it is harder to make a living in the canopy because it’s cold in winter and it sometimes dries out.”

Barton notes that the “layers” of the forest are simply an effort by different species and complexes of species to exploit every niche. Each tree, plant, insect, spider, lichen and so on lives where it does because it has developed a “survival strategy.” One tree species grows tall to soak in a lot of light. A shorter one gets along with less light in the shadows of the giants, but both survive, he said.

Fraver muses that, if you think about it, you’ll see that the forest is truly a vertical environment. Water and nutrients are drawn skyward by trees, which use sunlight to make carbohydrates that feed the tree, which produces pollen used by insects, and seeds, which float on the wind or fall to the forest floor to nourish other beings. Bits of bark and lichen and limbs are constantly raining down to the forest floor. “It’s a continuous cycle that takes place in a vertical plane. And it’s that cycling that keeps the forest alive,” Fraver said. 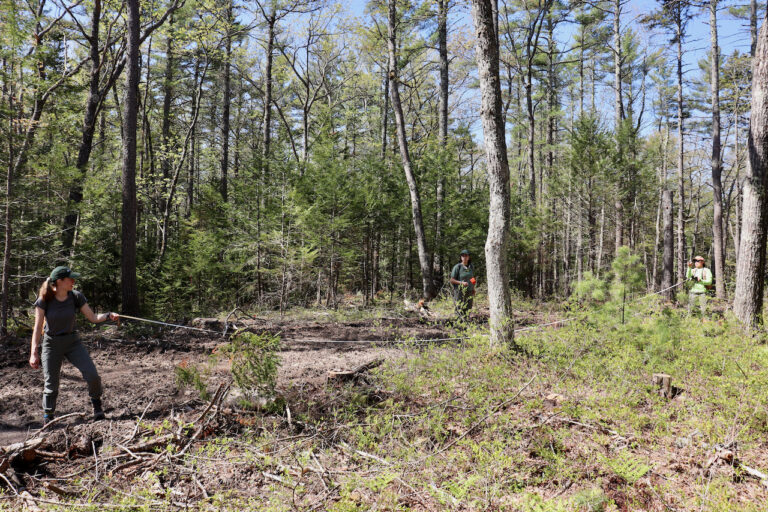 By Logan Johnson, Northeast Region Coordinator, Forest Stewards Guild On May 15, Forest Stewards Guild members participated in a joint service project and Guild Gathering at the Holt Research Forest. The group’s task, reestablish a research grid in the nearly 100-acre study area in the forest. The Holt Research Forest is a 350-acre research forest…

July 2011 By Joe RankinForests for Maine’s Future Writer On a recent summer day, while showing a visitor around the Penobscot Experimental Forest, the U.S. Forest Service’s Laura Kenefic and Robert Seymour, a University of Maine professor of silviculture, came across an old friend. Prone on the forest floor, it was slowly decaying into the…

Woodland Steward Program’s creators ponder how to boost enrollment By Joe Rankin Forests for Maine’s Future writer Cory Gardiner’s woodlot in Woolwich has been in the family for 90 years. Larry Beauregard has owned his woodland in Old Town since 1980. And Julie Foyt’s 40 acres of woods in Monmouth became hers only year before…