There is something about big trees that stirs up a feeling of awe in us. And when those trees grow together in an old growth forest, the feeling is magnified. We drop our hubris and can see time on a different level, and the slow workings of nature.

Native Americans cleared forest for farming and used fire to alter forest ecosystems. But they didn’t exploit the trees to the extent that European settlers did when they came to these shores some four centuries ago. At that time there were still “magnificent forests” of huge old trees, writes ancient forest aficionado Robert Leverett.

There were massive sycamores along the bottomlands of the Tennessee River Valley, oaks in Pennsylvania, cypress in the swamplands of the Gulf Coast, and 200-foot white pines in Maine.

Today those vast old growth forests are gone. Only remnants remain. But scientists say they’re more valuable for their rarity — the complex ecosystems they sustain, the things they can teach us about the way a forest works and about our place in the natural world.

In Maine, the most forested state in the country, the forests are very young, some only decades old. Most of the state has been cut over three, four or more times.

By any measure there is precious little of what we would call “old growth forest”.

Big Reed Pond PreserveThe Sierra Club Guide to the Ancient Forests of the Northeast by Bruce Kershner, published in 2004, listed 10 “classic” old growth sites in Maine, headed by the Nature Conservancy’s 5,000-acre Big Reed Pond Preserve, the largest old-growth site in New England, which constitutes the bulk of the 6,700 acres of old growth in a Maine Critical Areas Program inventory cited by the Guide. The other 1,700 acres were scattered among 82 sites, averaging 20 acres each, though the Guide adds that there is possibly as much as 30,000 acres of subalpine dwarf old-growth.

In a presentation this year, Kenneth M. Laustsen, the Maine Forest Service’s biometrician, said that stands with a very high component of very large sawtimber, 20 inches or more in diameter at breast height— the class of trees most closely approaching old-growth forest — represents only 47,000 acres, or three-tenths of a percent of Maine’s timberlands that are currently unprotected from harvesting.

“It’s clear that older forests are scarce and their future is precarious across the eastern United States. Less than 1 percent of forestland in the Northeast is considered to be old growth,” according to Beyond Old Growth: Older Forests in a Changing World by the National Commission on Science for Sustainable Forestry. “Mature forests with the potential for becoming older forest in a few decades are slightly more abundant, but they are rapidly disappearing. The northern end of the region has more older forest today than southern New England because the land was never farmed and the continuity of forest cover was never broken. However, timber harvesting currently threatens much of this remaining older forest.”

It is hard to get a handle on old-growth forest. Not least because there is no one accepted definition of it. It depends on who is doing the defining. Many scientists adhere to the basic definition of old growth as a forest where big, old trees, both alive and dead, are the featured players. Pretty much synonymous with the term “virgin forest.”

But the writers of Beyond Old Growth prefer the broader term “older forests,” saying that it acknowledges that even forests cleared or logged over the past couple of centuries have key ecological characteristics that traditionally have defined old-growth forests” and that with proper management they can acquire the values that make what we know as old growth such a precious resource.”

Andrew Whitman at the Manomet Center for Conservation Sciences, is one of those who doesn’t like to talk in terms of virgin old growth. There’s too little of it left, he said, it’s not ecologically significant, and it leaves out some forest with what Whitman calls valuable “old growth attributes.”

Old Growth Forest“Old forest,” where the trees may be 120 to 200 years old but are not true old growth, “has nearly the same conservation value as old growth but does not get the recognition,” Whitman said. He added that old and old growth forest has been declining at a rate of 1.5 percent a year since 1982. “Except for some areas in ecological reserves, I would expect to largely lose all old forest in Maine,” he said.

Shawn Fraver, a professor at the University of Maine’s School of Forest Resources who has studied old growth forests from Maine to Chile to Scandinavia, is more of a purist. But he too eschews the term old growth, at least in conversation. It’s hard to do it in research papers, Fraver said, everyone is used to the words old growth. He prefers the term “primary forest” and describes it as “a forest that’s never been harvested.”

But when it comes to describing an old growth forest, Whitman and Fraver are pretty much on the same page.

Walking into an old growth forest in Maine, the thing you notice is the trees are bigger, but there are fewer of them. If you hold your thumb out at arm’s length and spin in a circle you should “pick up 10 to 15 trees that appear as big or bigger than my thumb,” said Whitman.

But there should also be younger trees, trees of various heights and ages, helping create a multi-layered canopy, filtering the light falling toward the forest floor, they said. Old growth does not mean all the trees are old.

The other thing you should see is big standing dead trees and big dead trees lying on the forest floor, trees 15 inches in diameter or bigger, in various stages of decay. “You don’t get big logs until you get big trees,” said Whitman. “You’re looking at 250 years at least before you get those structural items on the forest floor.”

The big trees should be plastered with lichens and festooned with epiphytes. Expect to see lush mosses and plants such as Coral Root and Indian Pipe.  There should be liverworts and lungworts and a complex of mosses, including the Feathered Neckera, a characteristic moss of old growth forest. Below, in the spongy duff and under the many logs, you should find a variety of beetles, worms, spiders, millipedes and centipedes. You might hear pileated woodpeckers or catch a glimpse of a fisher in a tree.

One other telltale feature of an old growth forest is the forest floor itself, said Whitman and Fraver. It’s not, by any means, level. Instead it’s characterized by dips and mounds. Not coincidentally they’re more or less the size of a large tree’s root ball and its accompanying soil. This “pit and mound” topography occurs when old big trees are blown down, their roots upended. The mound is created by the exposed root ball, the hollow is where it once was. Gradually, over decades, the root rots and both the mound and pit are colonized by mosses, ferns, wildflowers and young trees.

“It could take an old field a thousand years to get that pit and mound topography,” said Whitman. “In managed forests you rarely get that, because large trees are cut before they can fall down”

The lack of pit and mound topography is a good indication that the land was once smoothed by the plow, even if it was a century or two ago. For Fraver, there’s one pretty sure indication that a forest wouldn’t qualify it as old growth. “If I see cut stumps that is evidence that it’s been harvested.”

Eagle Lake Old GrowthHarvesting is the biggest forest disturbance across the globe right now, said Fraver. In protected old growth forests it tends to be wind, insects or fire. In Maine fire hasn’t been as big a factor as other areas of the country, he said. Fraver, who spent years studying the patterns of disturbance in the Big Reed old growth forest in northern Piscataquis County for his doctorate, said that research showed only small portions of the canopy were disturbed each year, about 1 percent, “but every few decades a pulse of disturbance would take out up to 30 to 35 percent of the canopy in a big pulse.” Those bigger events were likely caused by something like a microburst, but help account for a variety of tree ages even in Maine’s biggest swatch of old growth., he said.

Whitman and Fraver say there are a lot of reasons to ensure that the old growth forest that remains is preserved.

For one thing, old growth stands have high levels of biodiversity, especially of species that depend on old growth. “Some lichen species are found only in the deep fissures in the bark of very old trees,” said Fraver.

Also, they said, old growth forests serve as a reference point, a benchmark. Said Whitman: “They give us a sense of what happens if you don’t harvest trees,” of how forests change without human intervention.

Third, they serve as carbon reservoirs. “Old growth forests store more carbon, that’s indisputable,” said Fraver. Younger trees convert carbon dioxide into wood faster, but old trees store more carbon. Fraver, who is also a dendrochronologist, a scientist who dates forest dynamics using tree ring data, added that it’s also useful to have old trees that can provide a glimpse into past climate changes, a window into the past, if you will.

But perhaps the most important reason to cherish the little old growth forest we have left is what it does for us emotionally, psychologically . . . spiritually.

Research has shown that walking through a forest of huge old trees changes the way we see ourselves in relation to the rest of nature. It’s humbling. It inspires awe. “The more open nature of an old growth forest gives you a difference sense of perception of the forest. It gives you a different perspective. It’s no coincidence that there are a few groves of ‘cathedral pines’ in Maine,” said Whitman.

Joe Rankin is a writer on forestry and nature. He lives in New Sharon. 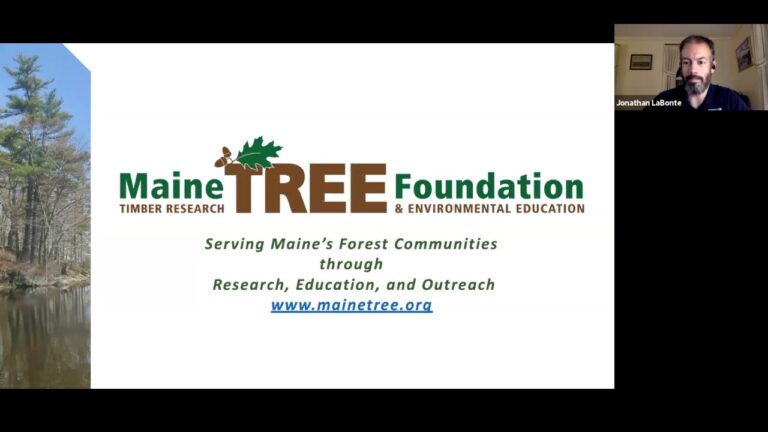 Maine TREE is thrilled to introduce Marin Harnett and Jack McCann – our new seasonal research technicians who will be working at Holt Research Forest this summer. My name is Marin (she/her), and I was born in New Jersey but have lived in North Carolina for most of my life. I graduated from NC State… 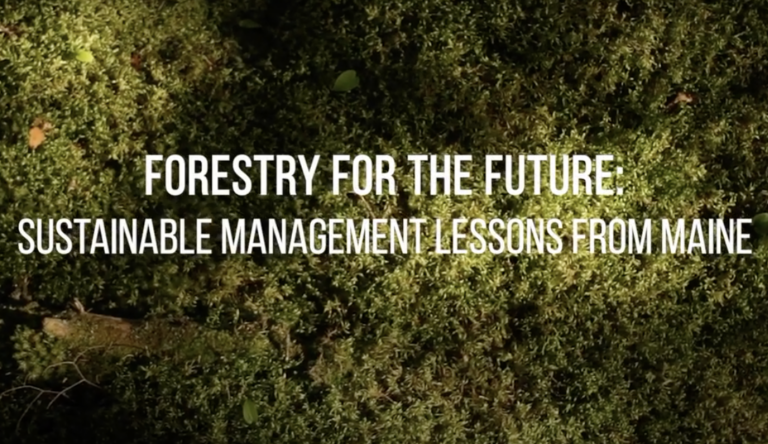 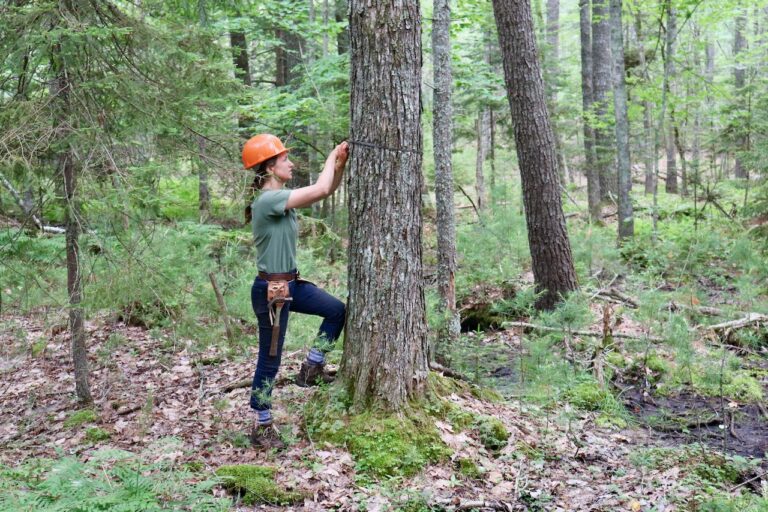 Are you looking for a fun and interesting summer job that allows you to work in the woods? This summer we are hiring seasonal Research Technicians who will collect data for several existing ecosystem studies, and participate in novel applied research projects.