Much of the southern half of Maine is dry. Really dry. Lawns brown. Gardens struggling. Wells drying up. Things are bad on the rainfall front and in early August the forecasts weren’t looking good for rain.

The U.S. Drought Monitor for Aug. 9 said the southern tip of Maine is in a severe drought, while portions of six southern Maine counties were in a moderate drought as well as a swath of Franklin County. Much of the rest of the southern half of the state was classified as abnormally dry. Rainfall deficits were pegged at 4 to 9 inches. Much of the rest of New England was in a similar, or worse situation.

A drought plays havoc with our lives. We may be forced to take the laundry to the laundromat because our well is low, watch our prized tomatoes wither, or haul water for livestock. It’s a stress on the natural world too. Everything living needs water: grass, trees, insects, amphibians, mammals large and small, birds.

In Maine droughts are not all that common. We average 42.2 inches of precipitation a year. Compare that to less than 15 inches on portions of the Great Plains and the desert southwest. So when things really dry up and stay dry it’s hard on our temperate hardwood and softwood forests.

Drought presents a dilemma for green plants, including trees, said Kevin Smith, the supervisory plant physiologist at the U.S. Forest Service’s Northern Research Station in Durham, N.H. That’s because the measures they take to reduce water loss interfere with their production of food.

On a tree’s leaves are stomatas, or pores. Those pores take in carbon dioxide, which the tree splits, using sunlight, to make sugars. The byproduct, oxygen, is released through them. Water too. Trees transpire a tremendous amount of water.

“Under moisture stress, one of the first things the tree does is close the stomatas. That helps save on water loss, but also greatly reduces photosynthesis. That’s a tradeoff the tree has to make,” Smith said. “That’s why trees and other green plants don’t grow as much” in a drought. “We see that in skinnier tree rings,” he added.

Trees are sensitive to moisture conditions, monitoring things virtually on a moment-by-moment basis, said Smith. “They know when it’s midday and they’ve been losing water through the stomatas and they’ll shut down and open again when it gets dark.”

It may take a tree weeks, depending on conditions, to show outward signs of drought. The leaves wilt and the tree will shed leaves or needles, fruit and flowers. The problem here is cavitation, when moisture loss is so severe that air bubbles get into the tree’s sapwood plumbing, known as the xylem, and prevent it from working properly. It’s not unlike what occurs when air bubbles get into your home’s water pipes. It can be serious, sometimes fatal, for a tree.

“In the interest of survival the tree will cut its losses under sufficient moisture stress,” Smith said. “It is becoming a smaller plant. It’s a gamble, because once the foliage is lost it loses capability to photosynthesize. If the drought is early in the growing season the tree can sometimes put out new foliage, but later in the season it will just hunker down and wait until conditions get better. Usually if the defoliation is more than two or three years it will make it less likely for the tree to survive.”

Exactly how all this plays out across the Maine landscape, with its various climatic zones, forest types, topography, and soil conditions is hard to predict. Like the weather itself, there are just too many variables.

“Drought stress is a combination of factors,” said Ivan Fernandez, a soil scientist with the University of Maine’s School of Forest Resources and the Maine Climate Change Institute who studies forest ecosystems. Those factors include precipitation, of course. But also water loss by evaporation, which is a function of temperature, humidity, and wind. The characteristics of the site where the tree is growing — which direction it faces, the soil texture and coarse fragment content— play a part. As does the physiology of the species involved, said Fernandez.

So, is a black spruce, a tree of boggy ground, or a white pine, which prefers dry, well drained soils, going to suffer more in a drought? Are spruce fir forests more vulnerable? Northern hardwood forests? Oak-pine forests?

In an article in the journal Nature in 2012 a team of researchers wrote that, when it comes to moisture, most trees are already living on the edge. They found that 70 percent of 226 forest species from 81 sites worldwide have only a “narrow” safety margin when it comes to drought stress and “therefore potentially face long-term reductions in productivity and survival if temperature and aridity increase as predicted for many regions across the globe.”

And those safety margins are largely divorced from mean annual precipitation. In other words, wet forests, dry forests, doesn’t matter. All are vulnerable to those potentially fatal hydraulic embolisms known as cavitation when water disappears. “These findings provide insight into why drought-induced forest decline is occurring not only in arid regions but also in wet forests not normally considered at drought risk,” the researchers said.

Another thing to remember about drought is that its effects never occur in isolation. Trees are always under stress, from something. And when a dry spell lingers, insects, fungi, viruses and other pathogens that the tree had managed to fend off can do more damage. It’s like one person trying to fight off a gang.

As the decades roll on, we, and our forests, will likely have to deal with more frequent and longer droughts thanks to human-caused climate change, scientists say.

Maine’s climate has already increased about 3 degrees fahrenheit since 1895, according to Maine’s Climate Future 2015 by the Maine Climate Change Institute., with another 2 to 3 degree rise by 2050. Maine’s warm season, when temps are above freezing, has increased by about two weeks since 1900 and models predict it will increase by another two weeks over the next half century, the report said. The kicker is that winter will warm up even more than summer.

Climate models predict an actual increase in precipitation for Maine, though the extra moisture will probably come in the spring and fall, not in the summer, and more precipitation will come as “extreme events” such as downpours, leaving longer, dryer gaps. There will be less snow.

There is “increased potential for drought” and its effects as a result of climate change,” concludes a U.S. Department of Agriculture factsheet on drought and the northern forest. The writers note that higher temperatures in the northeastern U.S., “combined with altered seasonal precipitation and increased frequency of high-intensity heavy precipitation events may ultimately result in less available moisture during the growing season as climate change continues.” Higher temperatures combined with lower recharge of water tables “are projected to result in an increase of consecutive ‘dry’ days by mid-century” with droughts occurring late in the summer and early fall.

The results will include more moisture stress for trees, shifting habitats, pest outbreaks, and increased

William H. Livingston, a professor of forest resources at the University of Maine, posits that “climate change will be a major factor in determining future diebacks and declines of trees in the state.” Climatic extremes will damage tree tissues and warmer winters will lead to increased survival of tree pests, he said. It has happened before. A 100-year drought in 1985 and 1987 caused severe dieback of brown ash on sites that had had high water tables. Another in 1995 killed up to 60 percent of pines on some sites in southern Maine.

“It seems contradictory, but Maine’s current climate of abundant moisture throughout the year predisposes the trees to drought damage,” he wrote in a short article published online by the Maine Climate Change Institute. “This occurs when trees can regenerate on sites that have enough moisture in normal years but inadequate moisture during drought extremes.”

Joe Rankin writes on forestry, nature and sustainability from his home in New Sharon. 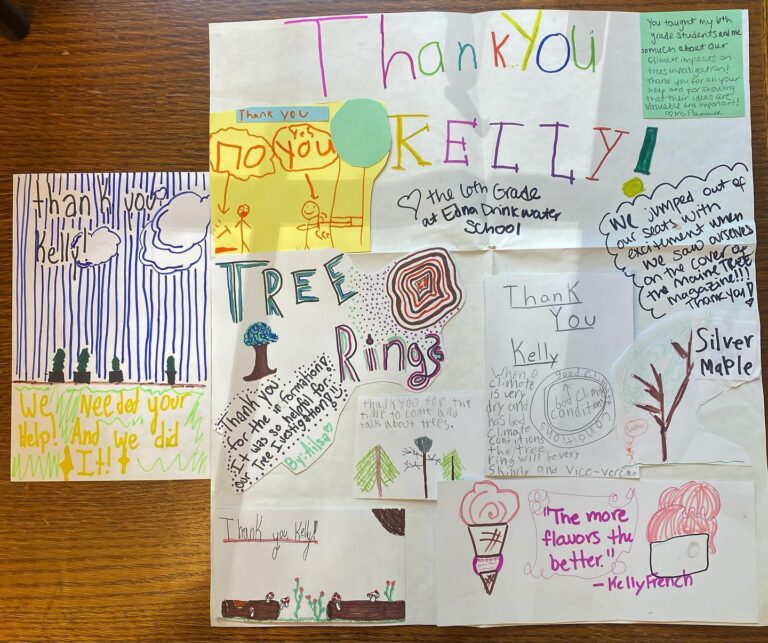 As highlighted in previous seedlings and OverSTORY articles, Maine TREE Programs and Outreach Coordinator Kelly French worked on a research investigation during the spring semester with the 6th-grade science class at Edna Drinkwater School in Northport. First, the students collected tree cores from trees found on their school’s campus. They then looked at the ring widths and local climate…

By JOE RANKIN Forests for Maine’s Future writer It’s perhaps fitting that the largest city in the most forested state in the nation should be nicknamed the Forest City. Of course, when Portland acquired that sobriquet, back in the 1800s, Maine and New England had a lot less forest. Portland has thousands of trees. Large… 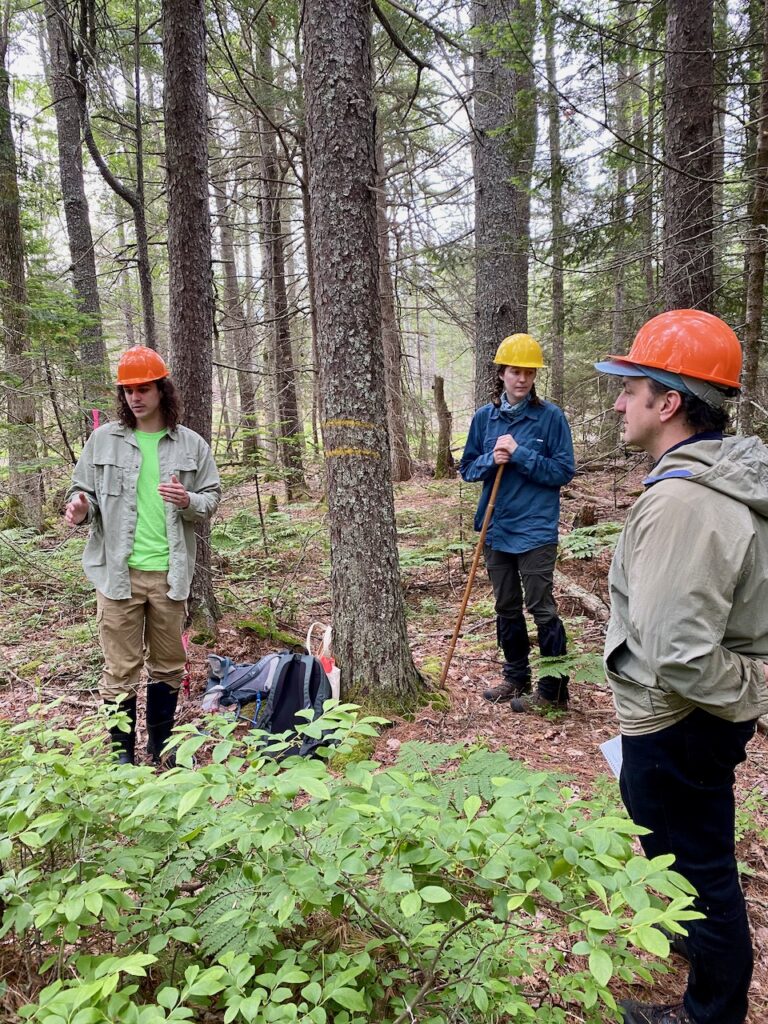 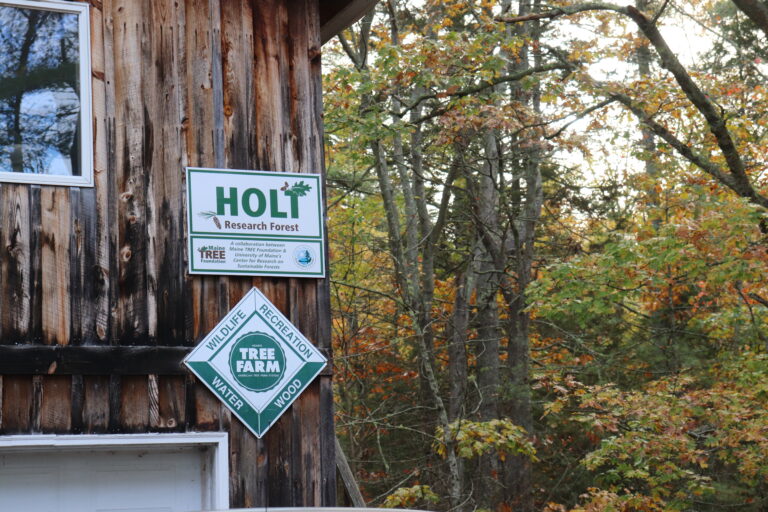 The HRF is the crown jewel of the ‘R’ in the Maine Timber Research & Environmental Education (TREE) Foundation.  Maine TREE acquired the 350-acre property, including buildings, in 2014 through a merger with the Holt Woodland Research Foundation with research conducted through a contract with the University of Maine. This 350-acre property in Arrowsic, Maine…

New composites, nanocellulose coatings, liquid fuels are on the horizon By Joe Rankin Forests for Maine’s Future Writer Dwane Hutto is obviously enjoying himself. He has just described a fairly complicated chemical process that started with ground up trees and produced a dark liquid in a vial that he holds high so everyone can see…