Stand on almost any hill in Maine, any mountaintop, and you’ll see forest, a blanket of trees. There are rivers, yes. Roads, villages, signs of civilization. But overall it seems to be a world of trees.

It is forest that created the Maine mystique. And forest that has proven a vital and enduring part of the state’s economy.

Maine: a carpet of trees (Photo: The Rankin File)The pulp-paper-wood products sector of the Maine economy has undergone profound changes, dislocations and stresses over the past 30 years with globalization and changes in consumer tastes. Scores of furniture plants, turneries and sawmills closed. Some paper mills, the economic linchpins of their towns, were shuttered, leaving hundreds without work.

But the forest is still very much alive and healthy, and the forest products economy is still a vital and significant part of the state’s overall economy, with the potential for a vibrant future, according to an illuminating new study — titled Maine’s Forest Economy — by the Maine Forest Products Council.

Maine’s forest is producing more wood than 50 years ago; workers in woods and mills are more productive than ever; and the state has a resilient and healthy forest, the report finds. There are tremendous opportunities ahead for the sector, but serious challenges as well, it notes.

“While some may think forest products is a mature industry, we know it’s not an industry that’s seen its best days, but one that has a bright future,” writes Council Executive Director Patrick Strauch is the report. “We are still the state’s leading manufacturing industry and its largest exporter.”

A handful of highlights from the report:

As he writes in the report, Strauch said he came away from the GrowSmart  Conference in Augusta last fall with the feeling that Mainers “needed to become reacquainted with our industry.”

But, to do that, the Council needed current information. “The economic impact data for our industry had not been updated in about a decade and, of course, that was before the worst recession since the 1930s,” Strauch said in an e-mail interview with Forests for Maine’s Future.

At 25 pages, the report is readable and easily accessed, especially the “Maine forest industry at a glance” page.

“We plan to disseminate the report throughout Maine – to legislators, officials, the media, and to those working in our own industry. We already have several forums lined up. As I’ve often said, this is not your father’s forest products industry and we want to help our neighbors across the state understand the innovation and investment that’s going on throughout our industry,” Strauch told Forests for Maine’s Future.

lloyd Irland, a former Maine state economist and president of The Irland Group, a Maine-based forest economics consulting firm, lauded the Council for putting together the document.

“It is really good that they’re telling some good news stories themselves,” said Irland, who did not have anything to do with the report. “It’s packed with facts. And it tells their story. Now, it’s their story. Obviously there are some that will disagree with parts of it. But the most significant thing is that it’s here at all. When is the last time you saw the industry produce something like this? It’s in a good, almost magazine format, with photos, easy to absorb. Two of the important things it points out are the safety record, and, yes, the jobs are declining, but the production volume is holding up.”

A pellet mill: the basic biofuel (Photo: The Rankin File)In addition to the forest industry at a glance section, the report includes an article by UM economist Gabe on his forest economy research; a bullet-point column by Wagner on the forest and the forest economy; a column by Denico on the status of the Maine forest, and a look at the value of current use taxation. It also includes pieces on land ownership, worker productivity, and safety and workers compensation rates. It ends with an upbeat piece by Council Board President Mark Doty on why the future of the state’s forest economy looks bright.

Here are some more facts and figures from the report about the forest:

As Irland notes, one of the more significant stories within the report itself is the one of jobs and productivity. There’s no question that the industry has been mauled over the past couple of decades by recessions and the upheavals brought by globalization.

And, as Irland also noted, productivity gains have been tremendous.

Before the 1960s the average logger could harvest 270 cords a year in a 30-week season. These days a logger can harvest 3,558 cords over a 47-week season, according to the report.

While productivity has gone up, injury rates have gone down over the past 20 years, with a renewed emphasis on safety and training. As a result, workers compensation rates have fallen dramatically.

Asked what he thinks are the most notable of the report’s many facts and figures, Strauch said “the top three probably would be the overall economic impact, $8 billion; the total employment, 38,789 jobs, and the fact that 10.3 million acres – 59 percent of Maine’s forestland – is certified by independent auditors as using sustainable forest practices.”

Winter harvest on the West Branch. (Photo courtesy of Forest Society of Maine)Were there any surprises for him in the report?

“I wouldn’t call it a surprise, but I was happy to see our industry has weathered the economic recession so well. And the latest available economic impact figures were from 2011 – we’ve made a lot of progress since then and when we do another study in a year or two, I think the numbers will be even better. The other fact that I find very heartening is that we have as much forestland by area – 89 percent – as when Europeans arrived in the 1600s. That is an amazing figure.”

But Strauch also acknowledges the challenges. Such as finding and training the next generation of workers. And building a value-added industrial infrastructure to process forest products in Maine rather than exporting raw materials. He says the state needs to make sure its regulations are “smart” — protective but not cumbersome.

Mark Doty, the Council’s board president, suggested that the state needs to provide incentives  to encourage manufacturing, expand value-added processing, increase the number of mills, and “enhance the image of forest sector jobs” and increase training opportunities.

“Each forest sector has its own unique opportunities and challenges, but the potential exists to strengthen our industry as is being done in Canada and other states such as Wisconsin and Minnesota. All the elements are within reach to build a stronger forest economy,” Doty wrote.

Optimizer at work at Pleasant River Lumber Co.’s high tech sawmill. (Photo courtesy Pleasant River Lumber)Irland said that encouraging value-added industries is a worthy goal, but a difficult one in a global economy. Simply lowering taxes or relaxing regulations won’t  do the job, he added, since there are so many factors involved, ranging from geography, to energy cost, from labor costs elsewhere in the world to proximity to markets.

“It would be smart for the state to look very hard to see that we have the regulations that we need, and that we don’t have regulations we don’t need and that we administer our regulations in a way that’s transparent and perceived fair and gives people decisions fairly promptly. Even if you don’t like it the decision you don’t want to wait two years for it,” Irland said.

When it comes to future challenges, Maine Forest Service Chief Doug Denico notes that   they will likely include insects, funguses and pathogens such as the emerald ash borer, the hemlock woolly adelgid, the winter moth and red pine shoot blight. A perennial pest that can cause massive damage — the spruce budworm — is already devastating forests north of Maine in Quebec.

And hovering over all of it, said Denico, is climate change, which influences many pest populations, but “threatens to have additional, as yet undetermined, impacts.”

Despite the challenges, the report’s authors are unanimous that the state’s forest products sector has a potentially bright future.

“Maine’s forests and forest products industry are thriving and will remain an essential part of our state’s economy,” said Strauch. “To paraphrase Dr. Wagner, the world will always need and want wood because it is environmentally sound, highly versatile, and, fortunately for those of us who live in Maine, our forests also provide clean air and water, wildlife habitat and beautiful places for us to live, work and recreate.”

Fresh from the Woods North Maine woods Maine seeks $25 million for conservation By Joe Rankin Maine’s north woods covers some 12 million acres, a near contiguous swath that qualifies as the largest unbroken tract of forest east of the Mississippi. While that forest has provided jobs and recreational opportunities for generations, these days it…

By Joe RankinForests for Maine’s Future Writer Pam Wells has patience.When she’s in search of the perfect photo she can wait hours, in some disheartening conditions. She’s not Bobcat (All photos courtesy Pam Wells)shooting brides or weddings or newborn babies or products. She’s photographing the natural world. And she knows there are a lot… 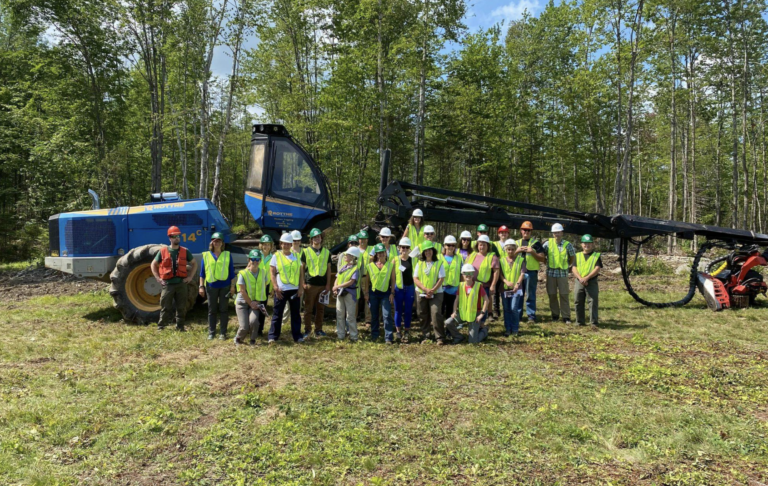 After going virtual in 2020 due to the COVID-19 pandemic, Maine TREE hosted 21 teachers earlier this month at our first of two Teacher’s Tours.  From Sanford to Surry and from Edgecomb to Ashland, teachers from all corners of Maine took part in exploring the forests of Maine’s Moosehead Region and learning how to bring Project… 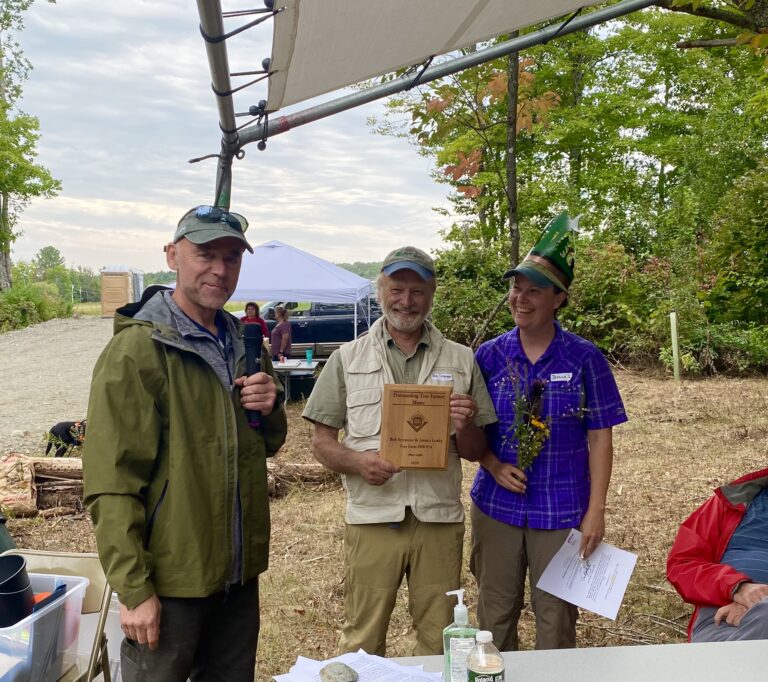 Maine Tree Farm Chair, Randy Lagasse, presents Drs. Bob Seymour and Jessica Leahy the 2020 Outstanding Tree Farmers of the Year a plaque commemorating their accomplishment.  SEBEC, Maine – After postponing for a year because of the COVID-19 pandemic, the Maine Tree Farm Program was pleased to see the return of celebrations for the Outstanding… 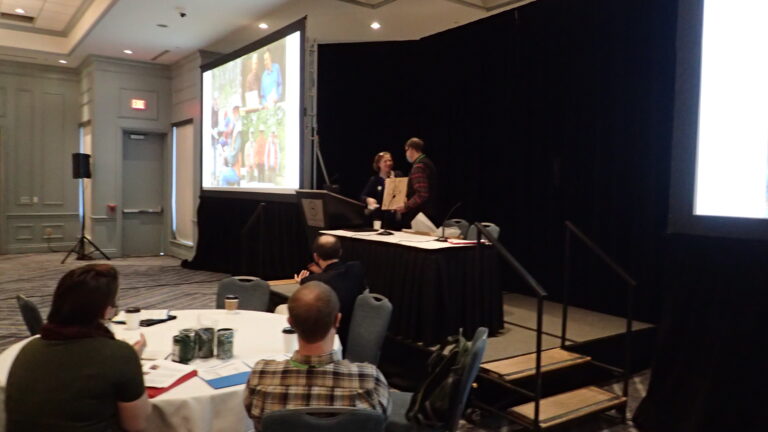 Maine TREE Foundation and the Commissioner of the Department of Agriculture, Conservation & Forestry selected Kenneth Laustsen for the 2021 Austin H. Wilkins Forest Stewardship Award.  The award was presented to him at the 2022 NESAF meeting in Portland. Ken started his career as a right-of-way foreman doing brush control work, through decades with Great…