Allen Higgins and Josiah Pierce talk about caring for the land

“The biggest thing is, you can’t have it all. You can’t have a quick harvest, all kinds of money in your pocket in the first five minutes, plus look at the long term. The long-term health of my forest is more important than anything. I’m not going to be here in 100 years, but this forest will be here in 100 years and there’s no reason it can’t be better than it was when I took it over.”

Can’t have it all? No quick buck?

Those are words you don’t hear too often in these days of the quick buck and mindless consumerism, disposable technology and a focus on short-term profits. Higgins, Maine’s 2011 Outstanding Tree Farmer of the Year, might as well be speaking a different language.

Forest stewardship is not a best practices manual. It’s a state of mind. An attitude. A mindset. An outlook. An ethic.

Allen Higgins and Paula Hersom (Joe Rankin photo)And it could be a threatened species. At a time when it’s more important than ever, says Tom Doak, the executive director of the Small Woodland Owners Association of Maine, one of the Forests for Maine’s Future collaborators.

“It’s important because of the changing values of landowners, and the turnover of land, because people are more mobile and the forestland ownership is aging. The tenure of ownership is shorter. And ethics take some time to develop. For some it’s not necessarily an automatic,” said Doak.

He notes that in decades past people lived closer to the land, depending on their particular piece of it for more for the basic necessities of life. They grew up on, and with, a piece of land and later inherited it. That tended to foster the feeling of a relationship that extends through time. They could envision handing it off to their children and wanted to offer it in better shape than they found it.

These days, said Doak, people acquire a piece of land, but often haven’t been exposed to that type of ethos. They buy or inherit a tract of forest, and want to take care of it, but don’t know how. Many think that caring for the woods means doing nothing, he said, when in fact, judicious logging and other practices can actually create a healthier, more productive forest.

But fostering a forest steward’s mindset isn’t as easy as legislating rules for wood harvesting. And too much regulation can be counterproductive, Doak said, discouraging people from wanting to own forestland, which is already challenging enough: dealing with motorized vehicles, midnight dumping, trespassing, and then coming up with the tax money.

But Doak admits that spreading and rejuvenating the complex, yet subtle mindset that is forest stewardship in the next generation of landowners will be a challenge, and that there’s no easy answer.

Higgins and his partner, Paula Hersom, are sitting on a log in their woods in Brunswick, Around them huge white pines reach for a blue sky. Under the pines is a carpet of . . . pines, so thick they almost look like grass. The next generation of trees, or even the next after that.

Higgins and Hersom, and Higgins’ sister Marcia, run Higmo’s Lumber, Music and Logging in Brunswick. It is a two-skidder logging operation, a circular sawmill, and a 90-acre tree farm.

The land off Bridge Road goes back in Higgins’s family and not so long ago was part of the declining dairy farm where he grew up. Higgins was a working as a mechanic for one of the local “dirt guys” in the late 1990s when he decided to set up a sawmill in the location where his father’s sawmill stood when it burned in the 1950’s.

What started as a hobby quickly grew into a business.

Now the mill’s 52-inch blade saws a quarter of a million board feet of lumber a year for sale to local homeowners, contractors, and even wooden boatbuilders. Low grade wood is sold as pulp. The three are the only employees, driving the skidders and trucks, running the mill – and taking care of the land.

“I’m just carrying on the same tradition of what my dad and grandfather believed in. Which was, let’s not rape the land. Mother Nature will take care of it herself if we don’t go in there and do too much to mess it up. Mother Nature knows how to grow a forest, so let’s work with her, not against her. The soil will tell you what it wants to grow,” Higgins said.

“My father was a big believer in selective cutting. All he ever did was selective cut. He was looking to weed out something that was overgrown or low grade. I’ve done the same thing.”

The 80 or 90 acres Higgins now tends was pretty much left to fend for itself through the 1980s and 1990s, before he took it over and began more active management. The forest is mostly white and pitch pines, oaks, a little cedar. Higmo has thinned trees, and laid out permanent skid trails and a log yard. He said when they log a section they try to do what needs to be done there for at least the next decade and a half. Repeated messing around, he says, would play havoc with the next generation of trees.

Education is a key ingredient, said Higgins, who said he has taken advantage of all sorts of opportunities to learn from the experts, and who now tries to pass that on. This year he will host the 57th Annual Tree Farm/SWOAM Forestry Field Day at his place in Brunswick on Sept. 10. He also hosts an annual Saw Mill Days at Higmo’s in November.

Education also means getting to know your land, he said. Spend time there. Look around. See how the trees grow. What grows where. How the sunlight hits.

Another key: slowing down.

“I think my biggest priority long term is to leave it as good or better than I found it when I’m gone. That means planning accordingly. Don’t walk in the forest and say, ‘you know, I think I’d like a trail right here and we ought to cut it right now.’ It takes many trips to make that kind of decision. It’s like measuring logs. When you drop a tree and limb it, that’s the wrong time to measure logs.

“If you’re acting in haste there’s a problem. It’s going to take 70 to 90 years to grow a tree for sawlogs. If you’re taking five seconds to decide what to do with it once you’ve dropped it, that’s the wrong answer. You have to slow down a little bit. And it’s a hard thing to slow down. The economy makes you want to crank. It wants to make you go fast. But it’s never the right thing.”

Higgins said the most important thing his forest has taught him is patience.

Higmo in the sawmill (Joe Rankin photo)“Impatience always leads to wrong decisions, whether it’s the business or the woods themselves. It’s kind of a weird combination. To survive as a small business you have to be a go-getter, but at the same time you have to make the right decisions and to do that you have to be patient.”

For Josiah Pierce, forest stewardship isn’t something you can learn so much as absorb . . . from the forest itself.

“What’s needed is the desire, and the desire comes from being out in the woods and seeing how beautiful it is. Once you have the desire you go for the knowledge. Knowledge of which plants you try to control – multiflora rose, Japanese knotweed. And what you encourage and how you encourage it. Knowing what’s right for a particular area and soils, where the hemlock grows best and the white pine grows best,” Pierce said.

Pierce and his wife Kathy were the National Outstanding Tree Farmers of the Year in 2007. It’s a signal honor.

Jo Pierce manages some 2,000 acres in Baldwin. Its core is 360 acres that he’s the sixth generation in his family to own.

While Pierce believes a person can pick up the forest stewardship ethic at any time in life, he says it can also be handed down from parent to child. What it takes is time: in the woods.

“Encourage your children to play in the woods and walk in the woods. I was exposed to my father and his love of the woods. Just being out there in the woods with them is important. If it takes it takes, if it doesn’t it doesn’t. But they’ll see and understand that it’s a part of them,” said Pierce, who has a son who lives nearby who is interested in the woods. His other two children live out of state.

His advice to those who want to learn how a good forest steward relates to the land is the same: get out and walk in the woods with those who have a reputation for taking care of the forest.

Also, Pierce advises, seek out organizations like SWOAM, which are committed to fostering that ethic, and get advice from a forester. Read, he said. And, learn your trees, how to recognize them, not just by the leaves, but the bark.

But Pierce advises not just learning about your woods, but about yourself. It will help foster the proper perspective.

“It’s something to do with the woods are larger than me. They’re more important than me. They were there before I was born and will be after I’m dead. I’ve learned to think long term. I’ve said 100 years back and 100 years ahead . . . I’ve learned about time and my importance. And I’m relatively unimportant,” he said.

By Joe Rankin Forests for Maine’s Future Writer   In the video the young woman stops her car at a nature center, rummages around in the backseat, picks up a field guide and . . . tosses it aside. Instead, armed with her iPhone, she heads into the woods to learn about trees…. 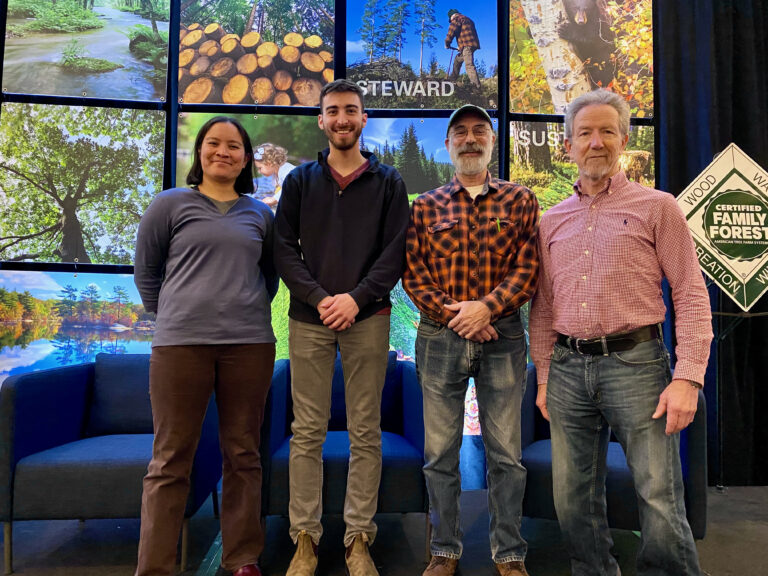 The American Forest Foundation(AFF) is inviting family forest landowners and foresters from across the country to join their 2021 National Leadership Conference and Inaugural Landowner Convention from February 23-25. According to AFF: “The [National Leadership Conference] has historically been an annual event for volunteers and leaders from the American Tree Farm System (ATFS). In later…