On a recent summer day, while showing a visitor around the Penobscot Experimental Forest, the U.S. Forest Service’s Laura Kenefic and Robert Seymour, a University of Maine professor of silviculture, came across an old friend. Prone on the forest floor, it was slowly decaying into the duff.

Laura Kenefic and Robert Seymour in the PDF ~ Joe Rankin photo“Hey, this is one of your dissertation trees,” said Seymour, pointing.

The hemlock was about 150 years old when Seymour felled it in 1996. It was one of 20 cut to supply subjects for Kenefic’s dissertation project.

It was a hot, buggy and muggy May when the work began.

They cut discs out of the trunks to measure sapwood, bagged foliage up for measuring in the lab. Kenefic, eight months pregnant and enveloped in a cumbersome bug suit because she didn’t want to use insect repellent, weaved ponderously through each tree, measuring each and every branch. A lot of branches.

“I would start crawling along the bole after the tree was felled, from the bottom of the crown to the top,” she remembers. “Because the branches come off the bole at a slight upward angle, I would travel quite far up inside the main stem before the branches got too close together and the crown too narrow for me to continue along the bole. But then I couldn’t back out because all the branches were cupped around me. It was quite a job to get me in and out of those tree crowns.”

The focus of the experiment was to develop an equation that would predict the amount of foliage on standing hemlock from measurements of stem size. It required relating branch diameter to foliage and tree size to the number and size of the branches.

The equations they developed were later used to predict the amount of foliage on trees in the PEF and relate that to their growth. The work spawned two papers by Kenefic and Seymour. Ultimately, helped make Kenefic’s career. She got her doctorate in 2000 and is now the the Forest Service’s lead scientist at the Penobscot Experimental Forest. Oh, and she’s the mother of Liam, born June 4 of ’96.

Kenefic and Seymour’s research is an example of the solid science that the PEF has produced over the last 61 years. The Forest has generated some 200 studies. The list literally goes on for pages. And the Forest Service’s long-term studies of various ways of managing mixed evergreen forests of spruce, fir, pine and hemlock, the basis and the core of the PEF’s research, are internationally recognized.

The PEF is the most studied forest in Maine and probably New England, and one of the most studied in the United States. It is one of 80 experimental forests and ranges across the U.S. and Puerto Rico operated by the U.S. Forest Service, one of 24 in the Service’s Northern Region, which runs from Minnesota to Missouri, Maryland to Maine.

Students at the University of Maine and other universities; researchers from other federal agencies, such as NASA; and from other states, provinces and countries come here to carry out research. As many as 100 scientists may be working on a couple of dozen projects there at any given time, in addition to ongoing work on the Forest’s long-term studies.

Research on the northern forest’s valuable conifer species dates back to the late 1800s. In 1950 a group of Maine timber and paper companies pooled their money and bought 3,800 acres in Bradley and Eddington just north of Orono and leased it to the U.S. Forest Service to research the spruce and fir forest so vital to their business.

Not much is known about the tract’s history before the big landowners acquired it, though it had likely been logged off and on for pine, spruce and other trees. In 1953 the first experiments, all focused on “increasing the productivity of the forest,” began, said Kenefic.

The core experiment, a so-called compartment study, was set out to explore over the time the effects of various harvesting methods, including clearcutting; selection cutting, a method that leaves a forest with different ages of trees; and several different kinds of shelterwood harvests, where most trees are cut, with older ones left to reseed the parcel, then those older trees taken out in later cuts. There was also the “logger’s choice,” cut, which involved taking out all commerically valuable trees over a certain diameter.

Over the decades the compartments were harvested as scheduled. Measurements were taken. Administrations came and went. Forestry preferences fell in and out of favor. At PEF the work went on. The result: an impressive body of data was built up about how various types of forest management affected forest renewal and tree growth.

There are other so-called compartment studies around the country, said Kenefic, who’s writing a book about the PEF, but none can match the PEF’s for consistency and detail.

“What’s unique about this forest is that this compartment study continues,” she said. “And that is because of the personal will of the forester who was here before me. He was committed to it and he continued it even in times when there was little funding and that is to his credit. That was Bob Frank, who is retired now.”

In 1994 the landowners deeded the PEF to the University of Maine Foundation to be jointly managed by the university and the Forest Service.

The university created a new long-term study, the Acadian Forest Ecosystem Research Program, which covers about 225 acres. Its crux: to look at forest management that mimics natural disturbances in the forest cover by creating small “gaps” in the woods that are then modified over time, and how those gaps affect other living things, such as salamanders and birds.

Asked to boil down what’s been learned from the PEF’s long-term studies, Kenefic and Seymour reply virtually in unison: “silviculture matters.”

“It’s shown that if you maintain a fairly dominant evergreen overstory during the regeneration phase you will regenerate that same forest,” said Seymour. “You can do that with uneven-aged or even-aged management. Back comes a nice stand of conifers . . . if you go about it in an exploitative way, cutting all those conifers, then you will lose them, with the exception maybe of fir.”

Work in the Penobscot Experimental Forest has shown that you can work with nature to create a healthy and productive forest, the pair say. And it has shown that what you cut, and how you cut it, matters.

Those messages are brought home in the Forest itself.

Walking into a “compartment,” or forest management unit, subjected to repeated cuttings of the best trees, a so-called diameter limit cut, you enter a sad woods: clumps of spindly trees, mostly low value hardwoods. Hardly a spruce in sight on land that loves to grow red spruce. The stand is scheduled to be cut again in a few years, but there likely will be nothing worth taking. “And this leaves you no place to go,” said Kenefic. Unfortunately, this “take the best, leave the rest” type of cut is common in Maine. An ongoing PEF study is looking at how to rehabilitate such a stand.

A few steps away, another compartment, another treatment: a shelterwood harvest that has grown thickly to spruce. On one tiny piece of it, a fiftieth of an acre, each tree is numbered in blue paint and periodically measured. Even if it dies it’s measured. This tiny plot within the compartment is one of hundreds throughout the PEF where individual trees are repeatedly subjected to regular measurement, like a kid whose height is marked every year on the door frame. It’s all part of the science.

A third tract has been subjected to light selection cuts over the years. It has lots of trees. Of different ages, sizes and species. The understory is dappled by the sun. “These stands are very aesthetically pleasing,” said Kenefic. “This has the most flexibility” when it comes to future management. “You can go in any direction from here.”

Kenefic and Seymour acknowledge that the jury is still out on some of the silvicultural methods being studied at the PEF. Six decades, while a long time for a forestry experiment, is a short time in the life of a forest. Twenty-five years into the compartment studies scientists were already drawing conclusions. Twenty-five years later some of those conclusions were turned on their head, said Kenefic.

One thing you can predict, however, is that the PEF is in a good position to continue doing cutting-edge science far in the future.

“There’s a database of trees out there that has a million measurements in it in the core compartment study,” said Seymour. “There’s no other place for that. You can get a $50 million grant and you can’t create that tomorrow. This place is invaluable because of the historical record that is in place.”

John C. Brissette , the project leader at the Forest Service’s Northern Research Station and a researcher who contributed his share of the studies on the PEF, agrees.

“What is truly unique about the research program on the PEF is the level of detail” in both the compartment studies and the university’s Acadian Forest Ecosystem Research Program, he said. “These investigations are among the most studied forest ecosystems in the world.”

Traditionally, experimental forests like the PEF have focused on local questions, in the PEF’s case the growth of spruce and fir. But Brissette said there is more and more interest in using results from many such forests to look at larger issues, “such as how do forests respond to air pollution, exotic pests, or climate change,” or to see how forests respond to stresses across latitudes or longitudes, or compare urban, suburban or rural land uses.

“The long-term research on the PEF will continue to help inform managers and policymakers whether the pressing concern is how to produce both commercial wood products and wildlife habitat or what will be the impacts of the next spruce budworm outbreak, biomass harvesting or climate change,” said Brissette.

For instance, the Forest Service recently got funding to look at the implications of the compartment studies on carbon sequestration, work that will begin this year, Kenefic said.

“We’re well placed with what we’ve created in the forest and learned about it to address emerging issues in forestry. There’s no question about that.” 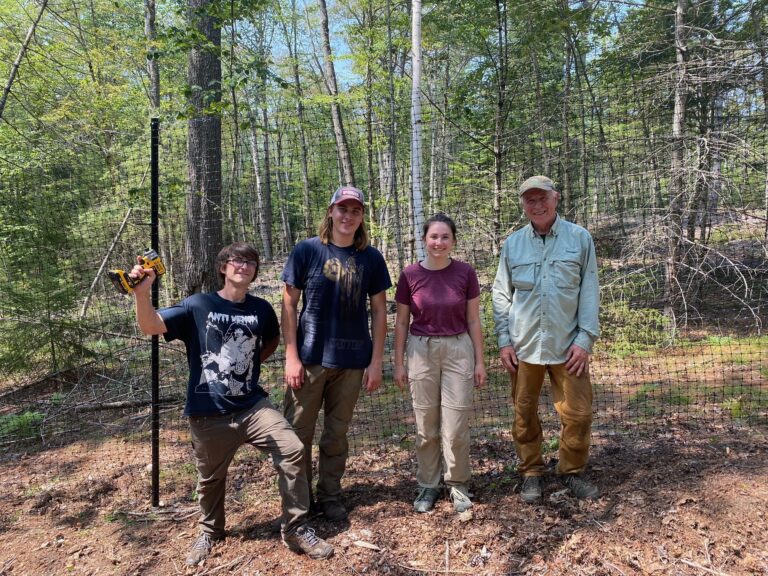 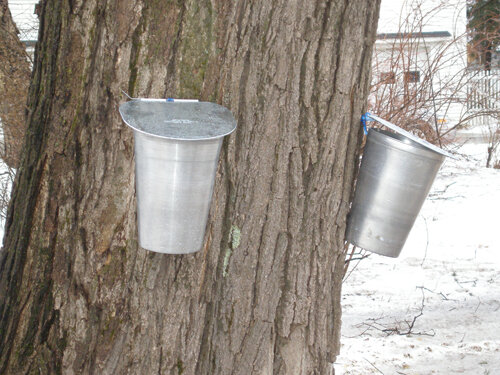 Travel the rural roads in this part of the country and you’ll see them along roadsides and driveways and in yards. Green in summer, a painter’s palette of orange, yellow, and red for a few glorious weeks in the fall. These giant sugar maples are New England’s signature trees, now that most of the old…