A group of hikers nears the summit of White Cap Mountain in the KI Jo-Mary region. (Photo courtesy of North Maine Woods)

Few would argue that the 205,000-acre Baxter State Park is a national treasure, but there is another – largely hidden – jewel in the forests of Maine. It’s a nonprofit organization called North Maine Woods, which manages access to almost 3.7 million acres of private timberland that is open to the public.

Larger than 18 Baxter State Parks, NMW is located in one of the most remote swaths of forestland in the East. It includes 3.5 million acres in the crown of Maine, and a separate block of 175,000 acres between Greenville, Millinocket and Brownville. The land has thousands of miles of logging roads, hundreds of lakes and ponds, dozens of mountains, and endless opportunities for hiking, paddling, hunting, fishing, wildlife watching, wild food gathering and other outdoor activities.

Albro Cowperthwaite is the long-time executive director of North Maine Woods. Based in Ashland, he traveled to the KI Jo-Mary gatehouse at Katahdin Iron Works (near Brownville) to talk about his work.

Cowperthwaite has spent his entire career at North Maine Woods. He arrived for a 10-week internship after graduating from college 33 years ago, and he’s still there.

According to Cowperthwaite, NMW was set up by landowners in 1971. It has three goals:

1. Manage public access to the region through 18 checkpoints, and maintain some 620 campsites.
2. Provide a measure of security for landowners against fire, vandalism, theft and other threats.
3. Welcome visitors to the region and explain its unique function as private timberland that sustains a myriad of public uses.

When Cowperthwaite came to NMW in 1976, much of the forestland was still owned by paper companies – including Great Northern Paper, Diamond International and International Paper. Now, the woods are largely held by non-industrial owners, from old-line family holdings like Pingree Associates and Prentiss & Carlisle to newer firms like Canopy Timberland and Merriweather. Forestland owned by The Nature Conservancy and the Appalachian Mountain Club is also part of the North Maine Woods system.

Originally, NMW managed access only in far northern Maine. In 1986, however, a group of landowners in the Katahdin Ironworks/Jo-Mary region asked the organization to operate there, too.

Cowperthwaite says about 175,000 visitors passed through North Maine Woods gates in 2008. To serve them, he has a full-time staff of three (including himself), 80 seasonal workers and an annual budget of about $1 million. “We’re a frugal outfit,” he says.

By contrast, Baxter State Park welcomed about 60,000 people and had a budget of about $3 million. There is no real comparison between Baxter and NMW, however. Baxter has a far more extensive, expensive and concentrated system of trails and camping facilities.

People who go to the North Maine Woods area get an old-fashioned, backwoods experience. Campsites are widely scatted over the 3.7 million acres, and typically have nothing but a fire ring, picnic table and outhouse. Some have even fewer amenities, although NMW is also managing the Jo-Mary Campground, which offers flush toilets, ice and a laundry, along with a boat launch and a sand beach.

While the landowners and managers who created North Maine Woods initially contributed some funding, the organization is now self-sufficient. It receives no state or federal funding.

The largest share of its budget comes from day-use, camping and bear baiting fees (hunting guides pay $100 for each of about 2,800 bear baiting sites). “It [the revenue from baiting sites] allows us to keep the gate fees reasonable,” says Cowperthwaite, “and the bear population has never been healthier.” The Maine Department of Inland Fisheries & Wildlife estimates there are about 23,000 black bears in the state, up from 18,000 in the early 1990s.

Due to differences in operating costs and management objectives, there are slightly different fees in the NMW and KI Jo-Mary regions (see “The Bottom Dollar.”) Youngsters and seniors pay nothing for day use. But North Maine Woods says it charges landowners, their staffs and even the employees of NMW when they visit the area for recreation.

“None of the revenues collected can be distributed to the landowners in this program,” the organization notes in its brochure. “Income is budgeted to meet expenses, and fees reflect this arrangement.”

The issue of fees has been a sore point for some people who hunt or have small landholdings behind the NMW gates. There was a long and highly publicized battle by the Millinocket Fin & Feather Club to overturn gate fees (the Maine Supreme Judicial Court ultimately ruled against the club). A recent article in Down East magazine demonstrated that some sporting camp and vacation home owners are still upset with the system.

Cowperthwaite says most visitors, however, do not find the costs excessive. The fees are similar to those charged at Baxter, Acadia National Park and in the state park system.

Canoeists paddle the St. John River at the site of the former Moody Bridge. (Photo courtesy of North Maine Woods)

Still, visitor numbers are down (not only at NMW, but at most other outdoor recreation spots as well). It’s a long-term trend – North Maine Woods usage peaked at about 300,000 visitors in 1980 – and it has Cowperthwaite worried.

“I’m very concerned about keeping the woods affordable,” he says. “Sadly, it’s part of a national trend [a decline in outdoor recreation that some attribute to the rise of computer games and single-parent families]. People are not coming, and they aren’t bringing their kids. We’re challenged to keep everything running off user fees.”

Even so, Cowperthwaite says recreational opportunities on NMW lands are better than ever. The KI Jo-Mary area, for example, includes the well-known Gulf Hagas (“the Grand Canyon of the East”) and a section of the Appalachian Trail called the Hundred-Mile Wilderness (for hiking purists, it’s really 88 miles). Since buying almost 37,000 acres from International Paper Co. in 2003, the Appalachian Mountain Club has built another 50 miles of hiking trails in the region.

“Nobody knows they are here,” says Cowperthwaite. “[The AMC] wants the general public to enjoy the land, not just their members.”

You even have a chance to help wildlife biologists with their research. This year, visitors are being asked to report information about any snakes that they encounter. In 2010, the focus will be on butterflies.

If you don’t mind traveling well off the beaten path, the North Maine Woods/KI Jo-Mary system offer unparalleled recreational opportunities. The rules are few and simple, according to Cowperthwaite.

“Don’t litter,” he said. “Don’t burn the place down. Treat others like you’d like to be treated. Behave yourself, and respect the property.”

Fresh from the Woods is produced by Forests for Maine’s Future, a collaboration of Maine TREE Foundation, the Small Woodland Owners Association of Maine, the Maine Forest Service, and the University of Maine.﻿

By Joe Rankin Forests for Maine’s Future Writer Watching the edger-optimizer at Robbins Lumber Co.’s pine mill in Searsmont induces, first, a gee whiz reaction at the sheer, well, efficiency of it, followed by a sort of hypnotic state. Whoosh . . . a board or boards shoots out of the center, the guides shifting… 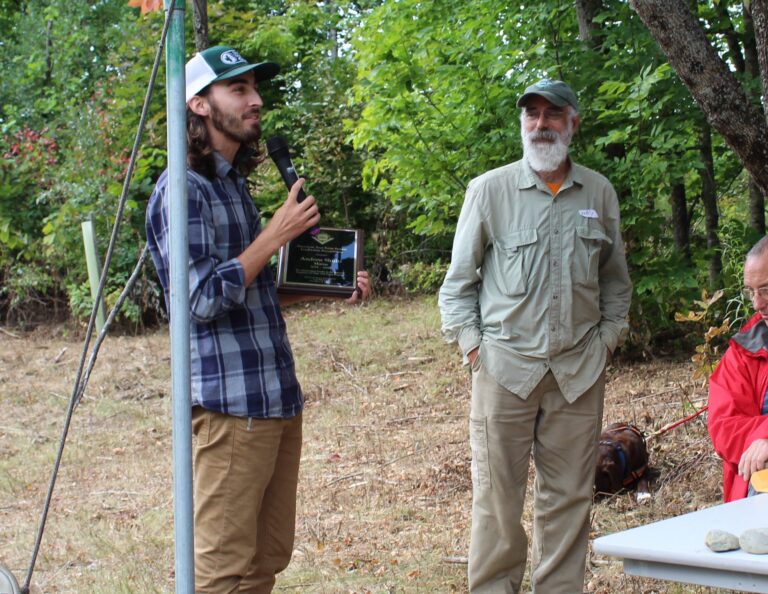